Raising Org. for Children Rights DevelopmentNewsResolving the dispute of closing the Al-Amal Center for the Empowerment of Rural Women

Introduction about the center

Al-Amal Center for Rural Women Empowerment is a voluntary initiative affiliated with the Buraidah Cooperation Council. The number of the administrative and technical team has (4) persons (1) males, (3) females. This center is led by a woman and the trainers are women.

The number of the administrative and technical team was (4) individuals, (1) males, (3) females. This center is run by a woman and the trainers are women. It is a place for training to provide them with the necessary skills, and a park for them to obtain psychosocial support to alleviate the effects of the domestic violence that befell them and the boring routine at home and on the farm. The center targets the village of Buraidah and two other villages. The number of women trained in empowerment programs and activities ranges from 30 to 50, and about 250 women are direct beneficiaries of the center’s programs and activities. The center needs integrated support in terms of equipment, supplies, and office rental cost.

The Conflict Cause is the absence of an official office for the center in the village of Buraidah because it is a remote rural area with difficult terrain and far from the center of the district. It can be reached by four-wheel-drive vehicles. This village has no rentable places for the center to use as an office  but there is a school, which is the only place suitable for conducting empowerment programs for the rural women. the school administration provided a simple opportunity of hope for these women to be trained in empowerment programs, but after a while, a dispute arose between the management of the center and the administration of the school, which led to the closure of the center for 7 years, and the dream of two hundred and fifty women from three villages who had an aspiration to change their economic level died, it stopped Empowerment and development work. This conflict contributed to the absence of the role of women in rural development in an area crowded with underage marriages, spinsters, widows, and divorced women, with high rates of domestic violence, gender-based violence, and erroneous customs and traditions that permeate society.

The conflict was selected as a priority for intervention among the nominated conflicts for resolution according to the gender-responsive conflict analysis methodology. Data were collected about it, the causes and effects were identified, and a gender-based conflict resolution team was formed consisting of (9) people from the initiative’s members, (6) female leaders of the solution and (3) males To collect data and mobilize the local community, the conflict was resolved, which culminated in the signing of an agreement between the parties to the conflict. This solution worked to restore souls and implant dreams and hope. Women suffer from the worst episodes of violence and bullying from their peers and communities in their life stages. It is important for women to lead efforts to resolve conflicts directly. This is a meaningful indicator of the position that women have begun to occupy in this society, as resolving the conflict through men is a success while resolving the societal conflict through women is a success and a cultural and social change in the structure of the target society

Forms of information and data collection are designed for all groups, as follows: –

Testimonials about the provision of enabling tools:

International and local organizations expressed satisfaction and admiration for the fruitful results of the conflict resolution efforts that ended up with a irrevocable agreement, restored hope and confidence to the hapless women and eliminated their sufferings and once for all. Consequently, they unequivocally pledged to provide sewing supplies and machines as a first stage of the empowerment process under the slogan From Closure to Empowerment.

The Fajr Foundation for Social Development, one of the local organizations operating in the region, intervened to provide the Rural Women Empowerment Center with equipment and supplies of sewing machines, cloth, and sewing supplies

The center has been working continuously until this moment, and a documentary video of the center’s work progress has been recorded. The video link is attached for you

Expected outcomes of the conflict resolution 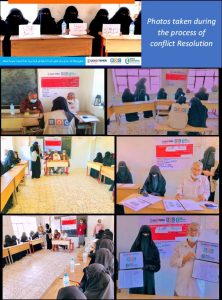